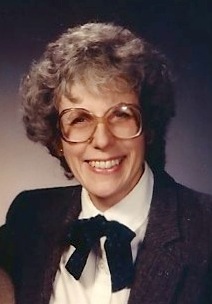 Mary Lou Pennal passed away peacefully on August 29, 2012, in Fort Worth.

Mary was born January 15, 1929 in Des Moines, Iowa, to Leland and Mary Forrester, as their only child. Growing up, she lived in Chicago and other cities as her family moved to follow their careers. Attending college at North Texas State teachers College in Denton, she received her BA degree. It was during her college years that she met Billy Eric Pennal, whom she married in 1951. Though Bill passed away in May, 2012, they would have celebrated their 61st wedding anniversary this month.

For almost 20 years Mary was a devoted teacher of 3rd graders. She developed many special relationships with her students and colleagues during this time. Following her teaching career, she worked as the office manager for her husband's private psychology practice in Irving, until their retirement in 1994. Two years prior to retiring, Mary and Bill moved to DeCordova near Granbury, where they lived the remainder of their lives.

Mary was a talented artist, writer and poet. She could accomplish anything she put her mind to--even the achievement of obtaining her private pilot's license. But beyond framed certificates and wall-mounted plaques, Mary's greatest attributes were her kindness, empathy and charity. She strongly believed in justice and had a tremendous love for all creatures, great and small. She instilled these values in others by her example.

Mary Pennal is survived by her son Eric and his wife Sandee, of Sachse; daughter Susan, her husband Robert and their daughter Marianna, of Silver Spring, Maryland; and many other friends and relatives. She will be greatly missed by all who knew her.

In lieu of flowers, donations may be made to Friends for Animals or First Presbyterian Church in Granbury.
Posted by goosefairy at 12:54 PM 1 comment:

There are a few things I've seen just one too many times online and I'm sick of seeing them. Hence the rant.

1) "I'm so excited I just pee'd my pants!"
Seriously? How old are you? Why in the world would anyone want to exclaim to the world that they have so little control over themselves and their bodily functions that merely getting excited causes them to lose control in such a spectacularly embarrasing way? Add "I just threw up in my mouth a little" to the same vein of disgusting exclamations over how extreme their feelings are about any one subject. Why in the world can these people not learn to express themselves in a better way? Urgh.

2) "I hope I haven't offended anyone" or any of the myriad variations on this theme.
Quite frankly, if you aren't offending someone you're probably not doing much of anything so why take up anyone's time with whatever the hell it is you're doing? There is always going to be someone out there who is just looking to be offended by something or someone. Those people thrive on being offended. Don't pander to them.
This goes hand-in-hand with the unfortunate tendency of women who feel it necessary to cushion ANYTHING they say with a little apologetic smile. Don't even get me started on that one. Why in the world do women (you don't see men doing this) feel they must cushion everything they do which *might* be interpreted in a negative way with that little "I don't really mean it/I hope I don't make you mad/etc..." smile.

Stop it. Just stop it. Try to be someone who means what they say without apologizing for it. Seriously.

In conclusion let me say ... I hope I've offended someone today
Posted by goosefairy at 9:37 AM 1 comment:

In honor of my father 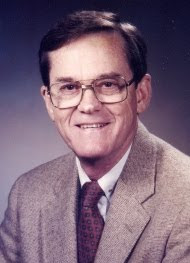 A memorial service will be held Wednesday, May 16, 11 a.m. at First Presbyterian Church in Granbury.

Bill was born April 5, 1930 in Nocona, Texas to Eric Derring Pennal and Ollie Jean Lemon Pennal. In 1951 Bill married Mary Lou Forrester, whom he had met at the beginning of their college years. They celebrated their 60th anniversary this past August, 2011 with the help of their wonderful children Eric and Susan and their spouses.

Bill graduated from Nocona High School in 1946 at age 16, and entered what was then North Texas State Teachers College the following September. He earned a BA degree in Art in 1949 and continued as a graduate student until joining the U.S. Air Force in August 1950 after the beginning of the Korean War. He remained in the Air Force 10 1/2 years, earning the rank of Tech Sergeant. During that time he was able to finish his graduate studies, earning an MA degree. He served the last few years in California as Crew Chief on KC-135 aircraft, one of his favorite jobs among several careers during his life. After leaving the Air Force he worked at Vought Aircraft in Grand Prairie. There he utilized both his aircraft and art training as a technical illustrator.

After several years he began working toward a degree in psychology, earning first an MS and then his Ph.D. in 1975. From 1975 to 1978 he was a member of the adjunct faculty in the Psychology Department at the University of North Texas in Denton. Dr. Pennal maintained a private practice in Clinical Psychology, his other favorite career until retirement in 1994. After 31 years in Irving, Texas, the Pennals moved to DeCordova in 1992, maintaining their office until retiring in 1994.

His many hobbies included flying his own airplane, painting, sculpture and computers. He loved music and enjoyed playing the harmonica.

Dr. Pennal was preceded in death by his parents, Eric and Ollie Pennal. He is survived by his wife, Mary; son Eric and his wife Sandee of Sachse; daughter Susan Ator and her husband Robert Ator and their daughter Marianna of Silver Spring, MD; brother Charles Pennal and his wife Shirley of Grand Junction, CO; cousin Sue Dowden of DeCordova; nephews Eric and Charles and their familes of Colorado; and many friends and relatives.

In lieu of flowers, donations may be made to Friends for Animals or First Presbyterian Church in Granbury.
Posted by goosefairy at 7:10 AM 1 comment:

I just finished making a lap quilt for my lovely little mother. It is a pattern I am very fond of and will probably make again. I especially like the back. It is all cotton; cotton fabrics on top, cotton flannel on bottom and cotton batting between. Easy care! 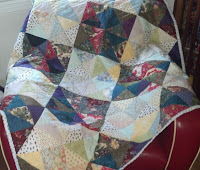 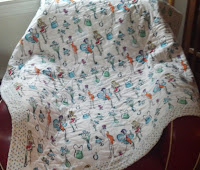 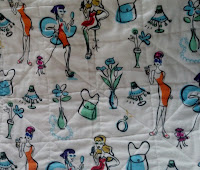 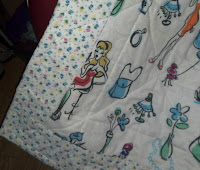 dinner and a movie

I am very lucky in that my father introduced me to science-fiction at a very young age. I love pretty much anything science-fiction related. I really have soft spot for the old 30's to 60's sci-fi. I have found something that punches pretty much all my buttons when it comes to this stuff. It is an online webseries called "The Mercury Men". You can catch it on hulu and SyFy.

It is a retro-sci-fi cliffhanger webseries that is so well done. They hit the mark on everything; characters (everyman caught up in circumstances beyond his control and the quintessential hero to save the day), lighting, music, bad-science threat (the moon!), and, the most important thing of all, BRAIN IN A JAR!

The basic premise is this: a government worker who does all he can to not work (you know the type) becomes embroiled in a nefarious plot of the Mercury Men (from the planet Mercury! men made of light!) to <spoiler> the moon! He is rescued by the daring, gorgeous Captain Jack Yaeger, engineer with the mysterious "League". Together they overcome obstacles and, I don't think it's a spoiler to say they save the day. Oh, but HOW they save the day is the story. 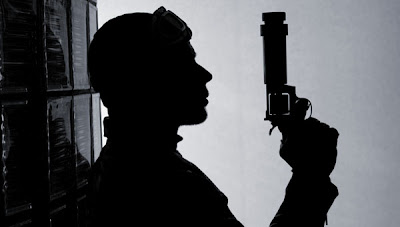 What would make the perfect watching experience would be to eat off the right dishes while watching the show. These are a must. Take your choice of dinner plates. 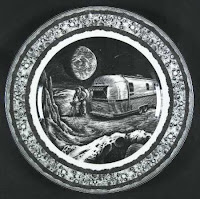 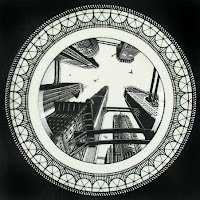 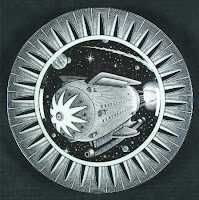 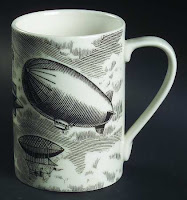 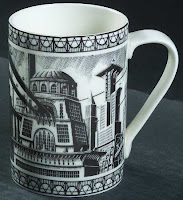 and you're good to go! Unfortunately, I couldn't find a proper bowl for eating your "Mercury Men" cereal out of but I guess you can't have everything.

Seriously, check these guys out. There is a ton of extra stuff on the website. Videos of behind-the-scenes stuff, commercials, an adorable one with a 3 year old fan getting a visit from Captain Jack Yaeger himself! There's also free downloadable digital props you can print out yourself.

There are currently 10 webisodes with the first nine telling the first season's story and the tenth setting you up for a new (please god!) season.
Posted by goosefairy at 6:30 AM No comments:

new girl in the shop 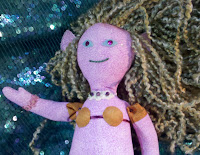 It's been a while since I posted anything but I've been busy with this'N'that. One of the things I've gotten back to are the mermaid dolls! There's a new one in the shop. Go see her here. Here's a little sneak peak just for you though. Say "hi" to Lavande!
Posted by goosefairy at 1:21 PM 1 comment:

Wow. How did it get to be November 12th already?

For your viewing entertainment here is another lovely model captured during the latest photo shoot.

goosefairy
Silver Spring, Maryland, United States
I appreciate your comments and would like to respond to them. If you want me to email you , you can put your email address in as yourname at sitedomain dot com (or dot net etc...).

check out my etsy store